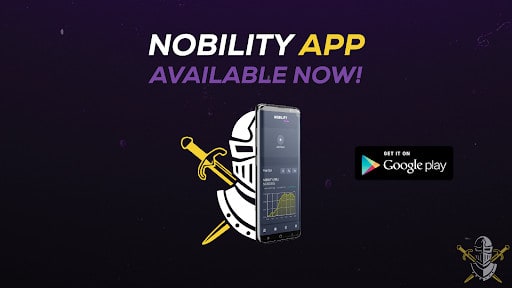 “We’re excited to announce the rollout of our first app. We’ve done a lot of testing, our app is solid, and the initial reviews are encouraging. The listing on Google Play is the latest step in our roadmap and demonstrates Nobility Token is proceeding at speed.” Kyle McDougal, CEO, Nobility Token

The Nobility Tracker app is a go!

The next stage on Nobility Token’s to-do list is the launch of their first NFT collection, but the 4,444 knight-themed tokens offer more than just custom digital artwork. In the Nobility Token metaverse, these NFTs will play an important role in the project’s play-to-earn ecosystem. The NFT sale will also fund the construction of $NBL’S game world in Decentraland and the Sandbox Metaverse.

Once the tournament zone is up and running, the play-to-earn function of Nobilit Token can start. In the $NBL arena, NFT owners will battle each other in winner-takes-all, player versus player combat. The winners will gain levels and rank up through factions, while the defeated knights will suffer NFT burn.

In anticipation of the NFT launch, the team has opened its whitelist. There will be a limited number of guaranteed places up for grabs, but either way, registering your interest now will significantly improve the chance of securing a place on the coveted Nobility Token NFT whitelist. Meanwhile, interested parties can check out the free app on the Google Play Store.

Features of the Nobility App:

To register your interest in the upcoming NFT sale and enquire about the whitelist check out the Nobility Token website here. To download the new Nobility Tracker app click here or search the Google Play Store for Nobility Tracker.

Nobility is a BSC token that will revolutionize the esports landscape by organizing and providing tournaments with large prize pools, helping content creators earn more from playing the games they love.