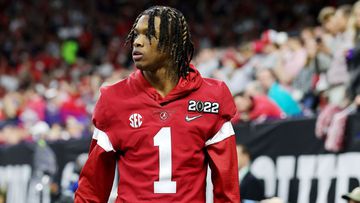 Drop-offs at specific positions could prompt exchanges, the expedient Alabama recipient is associated with a lot of groups and all the more last-minute pieces.
• The “everybody needs to bail” mumbles have appeared in calls over the most recent few days with groups picking from Nos. 6 through 11 — the Panthers, Giants, Falcons, Seahawks, Jets and Commanders — all investigating drops down, in the occasion the draft board falls a specific way (and a couple need to drop down notwithstanding). What will groups come up for? As we said before Monday (presently beneath): corners, edge rushers, and possibly beneficiaries.

• One group we’ve referenced reliably as a move-up plausibility is the Chiefs. My sense is that it could work out assuming a player they like (a beneficiary, edge rusher or corner) falls into a specific reach. What’s more, excepting a significant rebate, the Chiefs’ move would presumably be, probably, into the youngsters. They’ve told various clubs in the main 15 that going up in the first round’s upper ranges is presumably going to be too expensive for them.

• The Eagles are another group that could go up, and I could see them hopping as far as possible up to No. 6. For what? Most opponent groups accept it’d be for a corner, Sauce Gardner or Derek Stingley Jr. Also, I think edge rusher/cautious line could be on the radar as well — we’d referenced Philly possibly taking a more limited action up for those positions prior in the week.

• Two explicit players I’d watch in exchanges up would be Stingley and Jordan Davis. The idea out there is that getting Stingley, for another group, would mean hopping before Seattle. The Seahawks have done a huge load of work on the LSU star. Furthermore, for Davis’ situation, he’s been associated with the Ravens at 14, Eagles at 15 and Saints at 16, and I’ve heard the Commanders could think about him, as well, on the off chance that the recipients they like are no more. Prior in the day, I’d heard, for Washington, that could be in an exchange down situation. Presently, I’m figuring they could possibly go down far assuming they need him. Also, everything being equal, the Ravens have had chats on a move up — which could be for Davis.

• Several groups that could move around a little during the 20s: the Packers and Titans.

• Also, this is the season we interface players with groups, so one association I’ve heard for the current week that I haven’t raised at this point is Arizona and Purdue pass rusher George Karlaftis. In the event that Karlaftis, a polarizing prospect, doesn’t go at No. 23 to the Cardinals (I taunted Jahan Dotson to them on Tuesday), I could see him dropping out of the first round by and large. I’ve conversed with groups with 3rd and 4th round grades on Karlaftis.

• To the surprise of no one, what’ll probably prompt exchanges this evening is the point at which the draft approaches where the precipice is at sure positions. What’s more, a great deal of my discussions throughout recent hours have focused on that, in examining what groups could climb for. Three positions have stuck out — corner, pass rusher and beneficiary. So here’s a gander at where the tension focuses for those spots may be …

Corner: The initial two, in some request, will probably be Cincinnati’s Sauce Gardner and LSU’s Derek Stingley Jr. There’s a drop-off from that point forward, then, at that point, comes Washington’s Trent McDuffie. Then, at that point, perhaps a greater drop-off before the following gathering (Florida’s Kaiir Elam, Washington’s Kyler Gordon, Clemson’s Andrew Booth). So I’d suppose assuming somebody will take a swing, it very well may be to get before the Seahawks, in the event that Stingley’s still there in the Nos. 6-8 territory.

Pass rusher: Michigan’s Aidan Hutchinson, Georgia’s Travon Walker, Oregon’s Kayvon Thibodeaux and Florida State’s Jermaine Johnson II establish the main gathering. Furthermore, there’s a critical drop-off after that. Assuming you need one of them, it’d appear getting before the Jets at No. 10 may be the play — assuming Walker and Hutchinson are, in some request, Nos. 1 and 2.

Beneficiary: The initial four are USC’s Drake London, Alabama’s Jameson Williams, and Ohio State’s Chris Olave and Garrett Wilson. Once more, the drop-off is viewed as important to the following gathering (Penn State’s Jahan Dotson, Arkansas’ Treylon Burks, and so on.). I’d figure the principal gathering will falls off the board between Nos. 7 and 16, and groups needing to have their pick of the yield would need to get before the Falcons at No. 8.

You can toss the hostile linemen in there as well, however it seems like the initial three are presumably going to go — and likely without exchanges — in the initial six or so picks. Be that as it may, certainly, there’s most certainly seen to be a drop-off after the initial three people at tackle, as well.